Winter Field Day Association (WFDA) is a dedicated group of Amateur Radio Operators who believe that emergency communications in a winter environment is just as important as the preparations and practice that is done each summer but with some additional unique operational concerns.


We believe as do those entities of ARRL Organizations like ARES & RACES that maintaining your operational skills should not be limited to fair weather scenarios. The addition of Winter Field Day will enhance those already important skills of those that who generously volunteer their time and equipment to these organizations. This is why WFD is open to all licensed amateur radio operators worldwide.


This year, Mike Shreve will be managing the band plan. Your participation is encouraged. Please contact Mike if you are interested in participating.
Posted by Lakeland at 11:47 AM 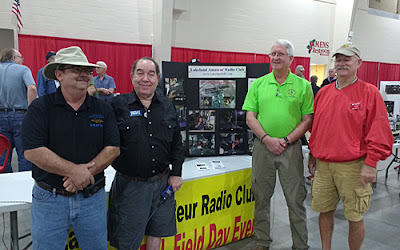 This year’s Tampa Bay Hamfest will again be held at the Strawberry Festival facilities in Plant City, Florida. The Hamfest will open to the public at 1 PM on Friday, December 13th and run through Saturday, December 14th, closing at 4 PM.

Again, the Tampa Bay Hamfest will be the West Central Florida Section Convention of the ARRL, American Radio Relay League. ARRL will have a booth and will have representatives available to answer any questions you may have.

The indoor hamfest sales and the FGCARC Service Desk will be in the 21,375 sq. ft. air conditioned Expo Hall  at 2301 West Oak Avenue. The general public parking and the tailgate entrance is at the intersection of Lemon Street and West Palmetto Avenue. The Tailgate area (see below) will be the large grassy field adjacent to the Expo Hall. Forums will again be held in both the Expo Hall meeting room and in the Armory building at the south end of the Tailgate area. All testing and related functions will also be in the Armory building.
Please note that all tailgate vendors should enter and leave via the general parking entrance on Lemon Street.

The Christmas Party for 2019 was a big success. Lots of food, and because of the environment, ample opportunity to chat during the meal. A large part of the credit has to go to David Z, as well as the many others who brought side dishes and desserts.

Two awards were presented during the evening. The club showed its appreciation to Patrick for his four years of service as club Treasurer. Over the years, Patrick has served as every officer the club has, including President. The second award went to our outgoing president, Matthew, who led the club to record high membership over the last two years. His laid back leadership style, and ability to encourage volunteerism was a winning combination.

At the same time we acknowledge club officers past, we recognize the new club officers who now take charge: Mike Shreve, our new club President, John Stanford, our new VP, Todd Rush, our new Treasurer, and Bill Johnson, or new old Secretary. It is up to our officers, board members, and every member in the club to move the Lakeland Amateur Radio Club ever closer to achieving its three objectives: Comradery, Education, and Service.

Some interesting stats on our Christmas Dinner Meeting
Expected to attend 69.
Actual attendees 57.
Number who paid but did not attend for one reason or another 5.
This would have brought our attendance to 62, and within 5 of the expected   number.

Last year only call signs were recorded. The count was 32. This year, the number of call signs recorded was 38, or six more than last year.


Attendance at the December Meeting

Attendance Summary
The following is a summary of the attendance by member prior to the December meeting, and taking into account that we missed a meeting due to a hurricane warning. Data for nine of those months are recorded below. Data is ranked by number of meetings attended.